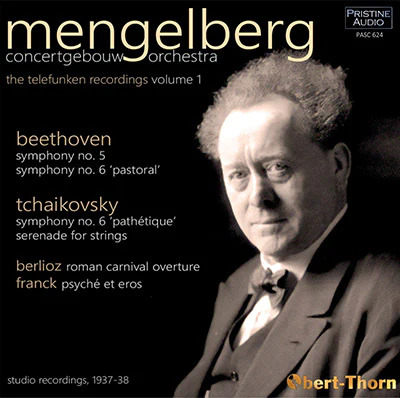 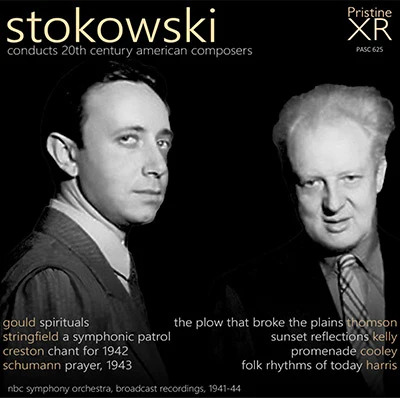 Pristine continues their Willem Mengelberg reissues with this 2-disk set of the conductor's' first Telefunken recordings made in 1937 and 1938. The Concertgebouw has two sections, the first (Grote Zaal) seating about 2,000, with glorious acoustics. The second (Kleine Zaal) is a much smaller hall used for chamber music and solo performances. Pristine already has issued the marvelous 1940 Telefunken Ein Heldenleben(PASC 103), particularly important as this score was dedicated to Mengelberg and the Concertgebouw. Pristine also has issued the extraordinary 1928 Victor recording with the New York OPhiharmonic (PASC 104). This fisrt set of the conductor's complete Telefunken recording is the least interesting. For whatever reason, Telefunken elected to record Beethoven Symphony No. 5 in the small hall, and the luxuriant richness of the regular hall is absent. And the performance is rather hectic with a few brass burbles in the final two movements, surprisingly not corrected. This is an oddity in the Mengelberg discography. If you wish to hear his Beethoven Five surely the one to check is the live 1940 broadcast available on Pristine PASC 236. The Pastorale, recorded in the Grossehal, fares much better sonically, a typical Mengelberg approach with  rubado and portamento. Again collectosr should check out the 1940 live performance, also available on Pristine. I found Mengelberg's Pathétique disappointing. There are the expected portamento effects, but engineers did not capture the famed Concertgebouw brass effectively. The Serenade for Strings fares better. Finest audio is heard in the Berlioz overture, Mengelberg's only recording of this composer;s music MarkObert-Thorn made these transfers, and they are excellent although they cannot improve on poor audio of the originals. Fortunately, later Telefunken Mengelberg recordings are more successful sonically, and I look forward to their release

How fortunate for collectors that Pristine continues to releasse llive recordings by major conductors. Here is a important issue of music by American composers conducted by Leopold Stokowski when he was leader of the NBC Symphony 1941 - 1944. He always encouraged and programmed music of American composer. We have Thomson's suite from The Plow That Broke the Plains, which he recorded twice commercially, once in 1946 with the Hollywood Bowl Orchestra for RCA, and again in 1961 with the Sympho y of the Air for Vanguard. This vibrant performance of Morton Gould's Spirituals is admirable although sonicaly it of coure cannot match the composer's RCA Chicago Symphonyrecording. Stokowski did make two commercial recordings of Gould, the Guaracha from the Latin-merican Dymphonette, and the now-forgotten Dance Variationsfor two pianos and orchestra. Edward Johnson's program notes give details about all of this music, all welcome additions to the Stokowski discography. Andrew Rose's XR remastering is effective.

Pristine already has issued a dozen of historic Maria Callas opera recordings: Now we have this famous La Scala recording of Rossini's Il Turko in Italia recorded August 31 - September 8, 1954. It was the sixth Callas complete Columbia/EMI complete opera recordings and boasts an all-star cast. The legendry soprano is in fine vocal state. Walter Legge produced the recording, and here it is sounding better than eve via Andrew Rose's XR remastering. There are with 44 separate cuing tracks. No libretto, but that should not be a problem for operaphiles. These Pristine reissues are definitive in production values.
‍
R.E.B. (March, 2021)