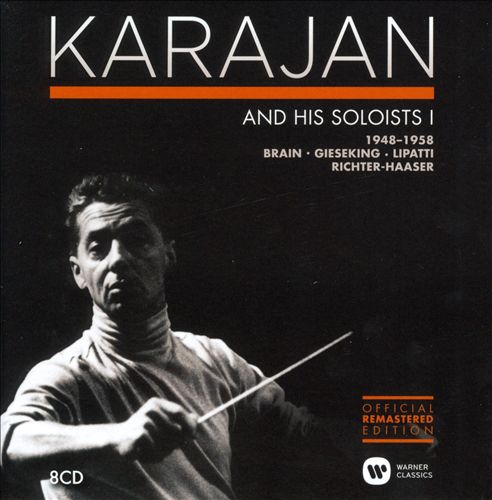 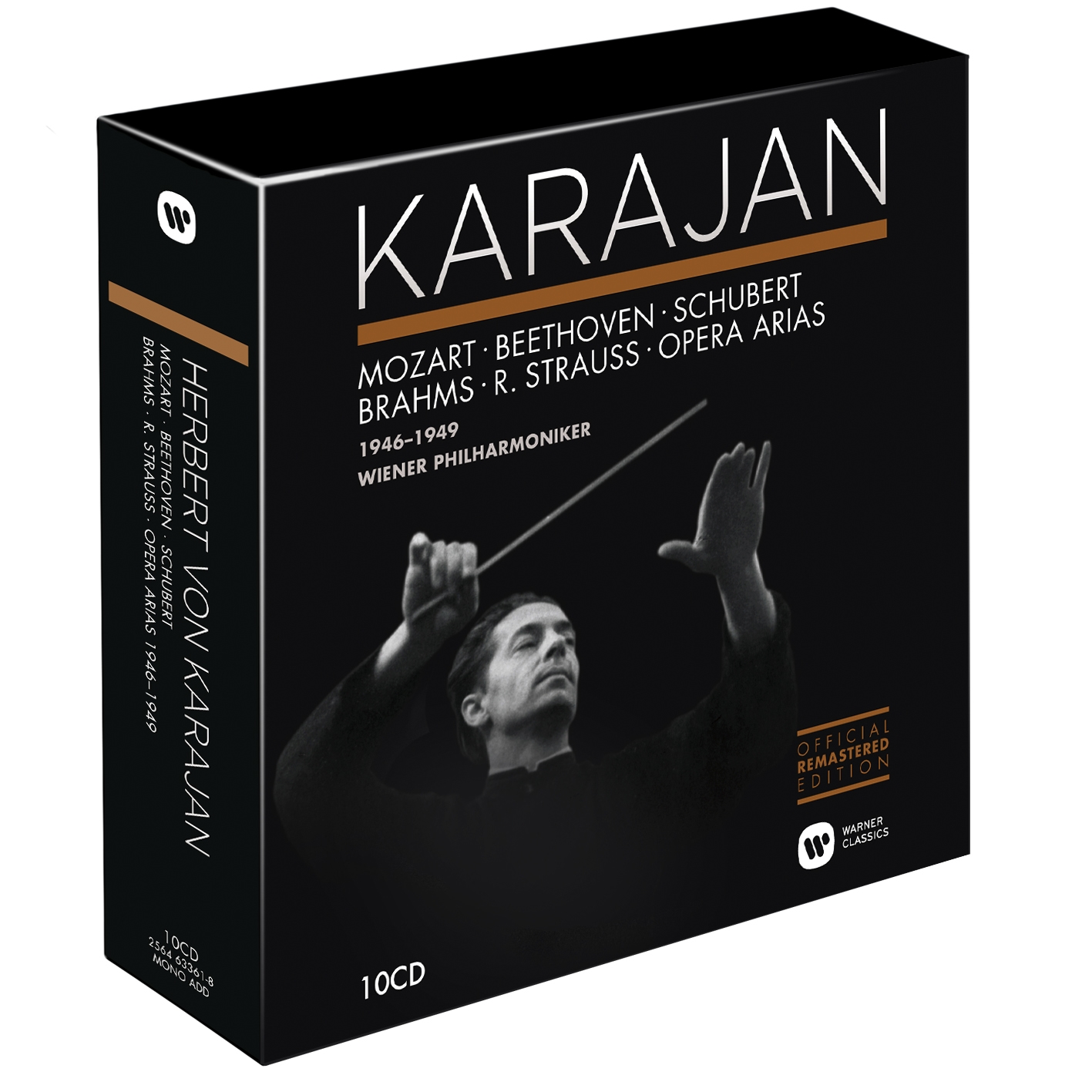 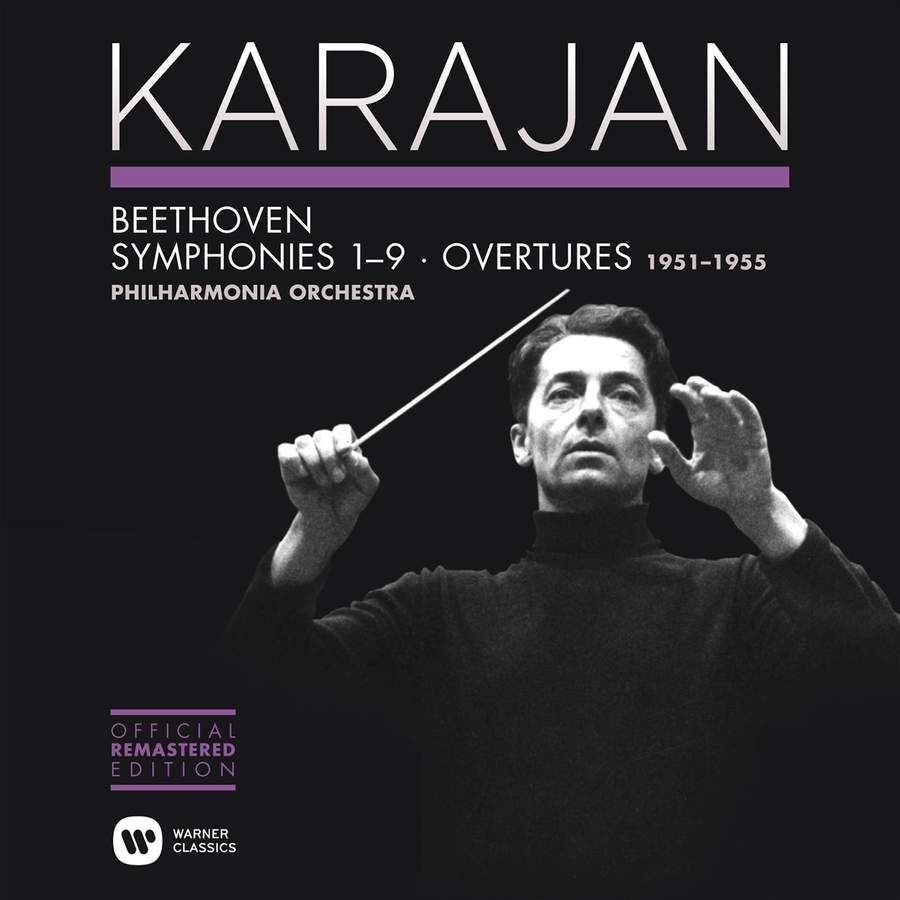 Warner Classics is releasing 13 multiple disk sets of recordings by Herbert von Karajan, a total of 100 discs, all remastered and sounding better than ever. They call this the Karajan Official Remastered Edition. This is to commemorate the 25th aniversary of the conductor's death July 18, 1989. Number of disks per volume varies from five to ten, and all are budget priced. Each box contins the CDs and a small booklet with detailed recording information, but there are no progrm notes. Three of the first issues are mentioned above:
Karajan and His Soloists (8 disks) couples recordings of his collaborations with Dinu Lipatti (Schumann/Mozart Concerto 21), Walter Gieseking (Schumann/Beethoven 5/Mozart 23/24)/Franck Symphonic Variations), Dennis Brain (Mozart concertos/Sinfonia concertante), Kurt Leimer (Leimer's concerto) and Hans Richter-Haaser (Brahms 2).
‍
Herbert von Karajan - Vienna Phiharmonic 1946-1949 (10 disks). This  offers recordings Karajan made with the Vienna Philharmonic from 1946-1949. We have standard repertory (Tchaikovsky Symphony 6/Romeo and Juliet), Mozart (overtures/clarinet concerto, Eine Kleine Nachtmusik, Symphony 33 and 39, Adagio and Fugue, Masonic Funeral Music), Beethoven symphonies 5, 6, 8 and 9,  Schubert (Symphony 8 and 9), Brahms (Symphony 2), Richard Strauss (Metamorphosen), and Johann Strauss waltzes and polkas),
The last two disks are of particular interest, the first devoted to excerpts from operas by Wagner and Strauss including the incomplete finale of Salome recorded November 1948. Unfortunately, side two of the four 78rpm sides was destroyed en route to England from Vienna - one wonders why they didn't just re-record that one side at another time. But we should be grateful for what we have. Ljuba Welitsch in her prime in the title tole. The Bulgarian soprano also is heard on another disk which focuses on Mozart, Mascagni, Puccini, Strauss and Smetana. We hear her singing Musetta's waltz song from La Bohème,recorded during the Salome sessions, and it is a knockout! I do not know of any previous issue of this fabulous performance, and one cannot help but wonder what other treasures might still remain in EMI's vaults?? And it is a pleasure to hear another remarkable soprano, Maria Cebotari in an aria from The Gypsy Baron and Strauss's Ariadne auf Naxos.

Karajan - Beethoven Symphones and Overtures. The Beethoven set will intrigue many as it offers the first of four complete recordings of the symponies, taped 1951-1955 with the Philharmonia Orchestra  recorded between November 1952 and June 1955 in London's Kingsway Hall. As Karajan insisted on using Vienna's famour Gesellschaft Chorus, Symphony No. 9 was recorded in Vienna November 24-29, 1955&#8212;it must have been quite expensive to transport the entire orchestra to that site. And of particular interest is a separate disk of Symphony No. 9, a stereo mix never previously issued&#8212;this was the early days of stereo. Oh does it sound terrific! There is a wide natural stereo spread that provides much more detail than heard in the mono version. Overtures included are Leonore, No. 3, Coriolan and Egmont. This is a set for collectors to treasure.