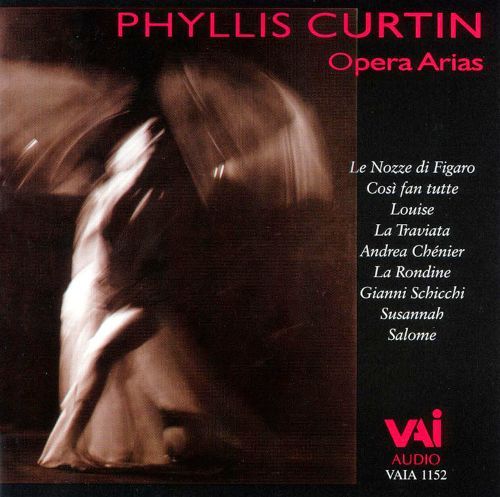 Born in Clarksburg, W. Va. in 1927, American-trained soprano Phyllis Curtin studied with Boris Goldovsky and made her professional debut in the American premiere of Britten's Peter Grimes at Tanglewood in 1946, with Leonard Bernstein conducting.  In this she sang the minor role of one of the two Nieces; later she would assume the major role of Ellen Orford.   Throughout her career Curtin gave numerous premieres including the American premiere of Britten's War Requiem with Erich Leinsdorf and the Boston Symphony in 1963.  She made her debut with the New York City Opera in the 1953/54 season singing, among other roles, the American premiere of von Einem's The Trial, staged by Otto Preminger, as well as Carlisle Floyd's Wuthering Heights, Susannah, and The Passion of Jonathan Wade, and the New York premieres of Walton's Troilus and Cressida and Giannini's The Taming of the Shrew.  Her Met debut was in 1961 as Fiordiligi although she did not sing there often.  Salome was a perfect role for her which she sang many times in New York as well at the Vienna State Opera. I have memories of her performance of it in Chicago in the mid-fifties on tour with the NYCO.  It was the first Salome I had ever seen and set a visual standard that has not been matched since  -- imagine a Salome who actually looks like a teen-age girl!  And as Curtin had ballet training early in her career, she made the infamous "Dance of the Seven Veils" totally believable.

In addition to her wide operatic repertory, Curtin gave countless appearances with orchestras in repertory ranging from Bach and Beethoven to Poulenc, Wagner and Schoenberg. It is stated that during the 1963/64 season she had 56 orchestral engagements including Boston, Cleveland, Philadelphia, Pittsburgh and Minneapolis.  In 1971 she sang in the American premiere of Shostakovich's Symphony No. 14 with Eugene Ormandy and the Philadelphia Orchestra, which they recorded for RCA (nla).  Notes with this CD state she has premiered more new American works than any other American singer.  Her operatic career ended in 1976, after which she began a distinguished teaching career which continues to this day.

This CD displays the versatile soprano in a wide range of music. The two Mozart arias, from a live performance in 1968, show her an ideal interpreter of this composer. Louise is an opera Curtin never sang on stage.  This performance of "Depuis le jour" is from a 1960 performance and finds her in radiant voice. Violetta was one of her more famous roles and here we have two big scenes recorded during a 1960 rehearsal.  The three Puccini items also are roles she never sang on stage.  She gives a touching rendition of the except from Susannah, an opera she premiered in 1955, five years before this concert performance. The Salome finale is from a 1968 live performance.  Do not look for the rich sounds of Leontyne Price in the Rondine aria, or for the emotional intensity of Maria Callas in Traviata. Curtin's voice has a rather broad  -- but controlled -- vibrato, ease of production and no pitch problems whatever.  She brings a sense of involvement into everything she performs.  Sound throughout is satisfactory, although it  is unfortunate more music isn't included.  This is a fine tribute to this major  American soprano featuring  music she has not recorded elsewhere.  Profuse notes, including comments by Curtin on the music and photographs by her husband, Life  Magazine photographer Eugene Cook, add to the attractiveness of this recording.  In the meantime, should you wish to explore more of the artistry of this soprano you might wish to investigate her CD of music of Latin American composers (Vanguard Classics SVC 114).
‍
R.E.B. (November 2000)