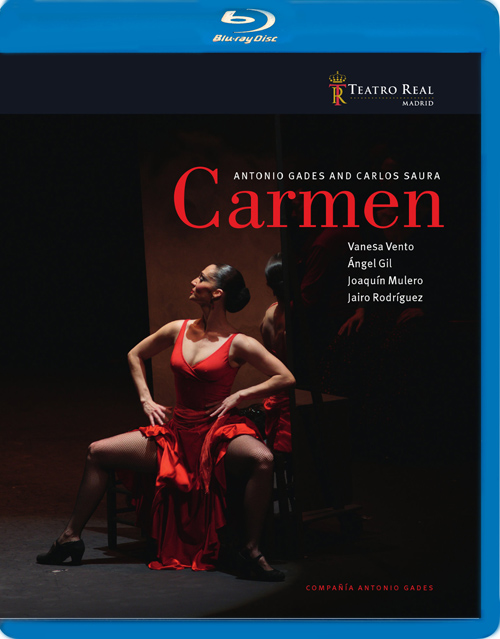 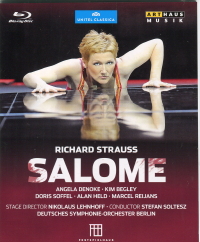 Don't expect Bizet's Carmen from this new DVD—it is a flamenco adaptation of Mérimée's novella that inspired Bizet's masterpiece created by legendary flamenco dancer and choreographer Antonio Gades and film director Carlos Saura. A 1983 film of this has become a cult classic; now we have it in this stunning version recorded at Teatro Real in Madrid May 6, 2011. The plot, not clearly outlined in program notes, begins as a rehearsal of a Spanish version of the play/ The choreographer falls in love with Carmen, the main dancer, and then reverts to interludes from the opera interspersed with many brilliant flamenco interludes that always don't seem to be related to the story. Sets are minimal featuring primarily seven rather large mirrors that are moved into different configurations. Music is provided by the two superb guitarists listed above. Very little is heard of Bizet's score, taken from the 1963 Decca recording with Regina Resnik, Mario del Monaco, Tom Krause and the Suisse Romande Orchestra directed by Thomas Schippers. The Act I prelude is heard during opening credits, and we have the Habanera, Toreador Song and a truncated death scene, all played to accompany flamenco dancing. The two male flamenco singers are excellent, better than the woman, Ángela Núñez "La Bronce."The dancing is spectacular, sometimes rather like a Spanish Riverdance, with remarkable control—often dancers must stand perfectly still. Superb video, excellent stereo (no surround) sound. A brief bonus includes interviews by the performers. If you are interested in flamenco dancing, this is a must.

Strauss's Salome is rather well-represented on DVD, but most versions disappoint. Perhaps the finest of all from a performance standpoint is the 1976 film featuring Teresa Stratas in a role she never sang on stage, but she is a beautiful woman and in the studio could achieve what she probably could not in a live performance. Her supporting cast is superb (Astrid Varnay, once a fine Salome herself, is Herodias), and for the first time on video we have a Jochanaan (Bernd Weikl) who is handsome enough to initiate Salome's demonic desire. A major problem here is video direction that has far too many super closeups; see our REVIEW .We also have Maria Ewing in the title role, acted far better than sung, a video that created quite a stir as when she performed this she actually removed that seventh veil in the infamous dance. Catherine Malfitano's video with Giuseppe Sinopoli boasts a superb orchestra, but Malfitano hardly suggests a teen-age girl and vocally is uneven. Karita Mattila's Met performance is negated by the modern staging (REVIEW). and Nadja Michael's two videos impress in spite of David McVicar's stupid production from the Royal Opera, and the almost equally offensive direction of the La Scala version (REVIEWS). And there is that fascinating 1988 Spanish TV production with Montserrat Caballé who sings the role beautifully (it was one of her favorites), but sits on a rock for most of the performance with a stand-in acting and dancing (!) (REVIEW). An off-beat production of Salome could be tantalizing—I would surely have enjoyed Peter Brook's 1949 Royal Opera production with sets by Salvador Dali that featured Ljuba Welitsch; it was widely blasted by critics, but at least it starred Welitsch. Speaking of Welitsch, don't miss the incredible discovery—a 1951 Viennese studio production with the Vienna Philharmonic conducted by Clemens Krauss. All YouTube offers is the final 10 minutes of the opera, but it is stunning with Ljuba at her peak of performance, and remarkably good sound. Let us hope the entire performance will sometime appear. This is not a video, but we have the audio which is accompanied by several photos of Welitsch as Salome. Don't miss it; here's the link WELITSCH 1951 SALOME. Incidentally the 1953 movie The Man Between included a few minutes of Salome presumably from a Vienna State Opera performance with Welitsch—exciting indeed!.You can also see this on .YOU TUBE This latest Salome is odd, supposedly live from the Baden-Baden Festspielhaus last year, although there is no applause at the end—surely even after a poor performance there would be some audience reaction. The production is not outrageous, but the direction by Nikolaus Lehnhoff is dreadful. Among the most annoying: Salome has short reddish-blonde hair (Jochanaan sports a mohawk bar), and wears a pink ballerina skirt, Narraboth shoots himself with a pistol, Herod joins Salome in the "Dance of the Seven Veils," after which she lashes him with one of her veils, Salome climbs down into the cistern as she awaits her prize, and Lehnhoff has decided that she is not killed at the end of the opera in spite of the composer's intentions. But the major problem with this new DVD is Angela Denoke who simply cannot cope with the demanding role. Thomas Grimm's video direction lets us see her vocal chords, particularly distracting when she is slightly off-pitch, as she often is. The rest of the cast is excellent, particularly Doris Soffel's preening Herodias, quite a change from Mahler and baroque music often associated with her. Video and audio are excellent, Subtitles are available in six languages including Korean. I cannot imagine anyone wanting to view this more than once.

March 1, 2008 was a fine night at the Vienna State Opera. Zubin Mehta conducted La forza del destino with a terrific cast. Nina Stemme was Leonore, the late Salvatore Licitra was Don Alvaro, with Carlos Álvarez as Don Carlo, and Nadia Kresteva as Preziosilla. Richard Hudson's sets and costumes updated the opera a bit, but not offensively so, and David Pountyney's direction always was logical and well paced. Scenery was minimal but much use was made of projected images, all of which were effective. Ballet sequences were outstanding, with the Vienna State Opera Chorus in top form in music they have performed countless times previously. Stemme, known primarily for her Wagner and Strauss (she sang Isolde in Domingo's recording of Tristan), was an ideal Verdian. Licitra here shows he was indeed a successor to Pavarotti, and the chemistry between him and Alvarez is remarkable. No question that young Bulgarian mezzo Nadia Kresteva is the sexiest Preziosilla ever; she puts on a great show. If you are looking for an updated version of Verdi's masterpiece that does not offend eyes or ears, here it is.
‍
R.E.B. (January, 2012)